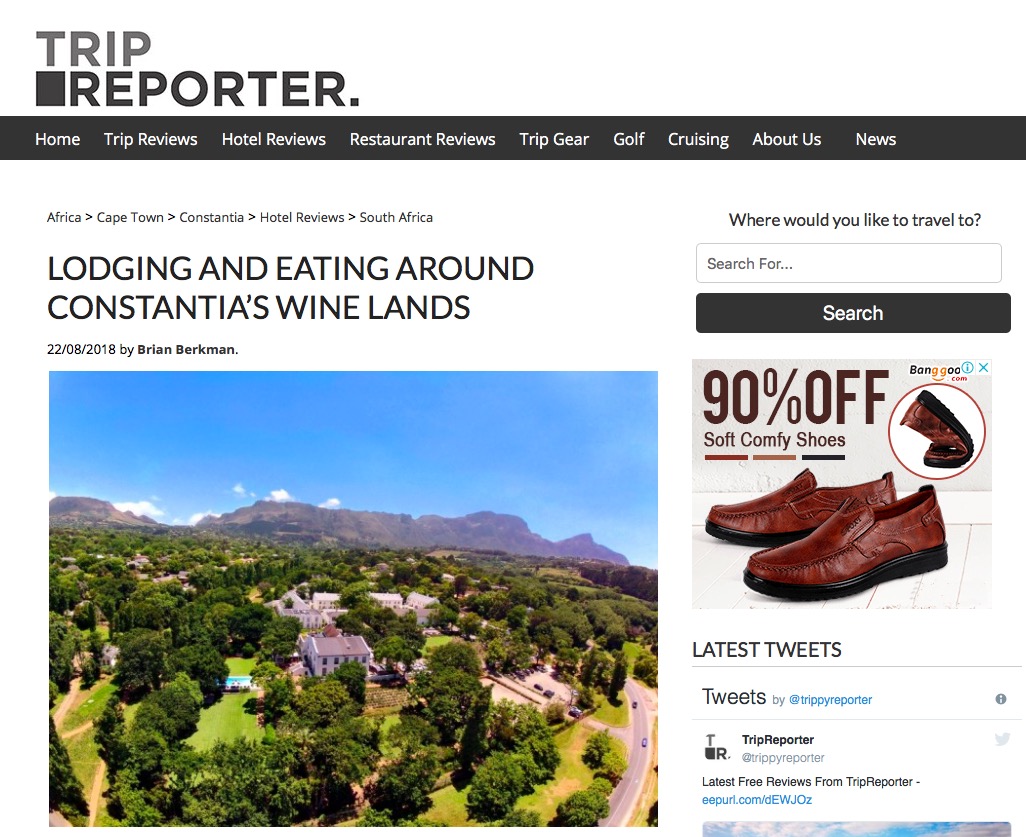 As first published on UK site, TripReporter. Click here to read it there.

Wine has been produced in the Constantia area of South Africa’s Western Cape since the late 1600s  and Constantia Wine or Vin d Constance, still highly acclaimed and collectable, was so feted it was written about by Austen, Dickens and Baudelaire and, after purchasing more than 1,126 litres of it, on his deathbed Napoleon Bonaparte refused any other drink.

The Cloete family were there in the valley from the get-go. That their Alphen Estate should, would and did become the go-to hospitality bolt-hole for the rich and famous of yesteryear is as true today. Although the Cloete family sold the property in recent years, it has been given a glamorous overhaul – one that savours all the history but is also now injected with the type of Hollywood glamour that finding the ghost of Marilyn Monre lounging on the white leather couch would not seem amiss. Coco Channel would, I think, like it too, especially the black-on-black bathrooms with subway tiles so shiny you can see yourself reflected in them. Gilded mirrors and brassy carriage lanterns bring in light while the white timber plantation-style shutters easily manage privacy and ventilation. Of course, there’s a terry-cloth covered arm chair in the bathroom, placed just so.

The Alphen Estate today is also the starting point for the Alphen Trail, a meandering path, along the river, which is a favourite with dog walkers and joggers. The Alphen Trail itself is just about three miles there and back but it also connects to three other trails which take a keen walker deep into the greenery of Constantia and up the side of Table Mountain. To walk all four trails will occupy about eight miles as a round trip and the Cecilia Forest Ravine allows you to extend your walk even higher up the mountain to the famous Cecilia waterfall. The celebrated botanical garden, Kirstenbosch, is on the route.

It is a popular trail and parking is a premium which is why leaving directly from the Alphen Hotel makes so much sense.

la Belle Bistro & Bakery is the coffee shop/bakery and the spot for light meals – great coffee is a given but their a la carte breakfast offering is outstanding. As a hotel guest, breakfast at la Belle is included in the room fare but you can – and I did – order any number of items from the menu at no additional charge. And, as an added incentive to enjoy their offering to the full, they bring beautifully sliced fresh fruits and a plate of pastries to the table even before you order.

The omelette with ricotta and zucchini is a cloud of flavour and meat lovers can bolster it with crispy streaky bacon and South Africa’s famous farmer’s sausage – boerewors.

The restaurant Blanko is located in the original Alphen Manor House (where the Cloete family once lived) and the contemporary art against the wall and mid-century influenced furniture happily sit alongside original yellowwood armoires and  a centuries-old grandfather clock.

The menu at Blanko is modern Italian with grazing platters – charcuterie, cheese, nibbles such as deep-fried garlic-stuffed olives – to enjoy with drinks and more substantial dishes such as red-wine roasted lamb shank which is rightly a Kove Collection classic which you will find on most of The Kove Collection menus.

On the opposite side of the Cape Peninsula is the Atlantic Coast (although just about 40-minutes away by car) and Camps Bay is one of the most popular seaside suburbs. The strip – jammed with the kind of gorgeous cars and sun-kissed beauties you may associate with Miami Beach – is lauded over by The Kove Collection’s properties – another five-star boutique hotel, The Marly and a string of restaurants and bars – that overlook the palm-fringed beach. I mention this because as an Alphen Hotel guest you will have special dibs on a Camps Bay beach lounger or preferential booking at one of the summer season’s hottest tables.

Back to the verdant elegance of Constantia: From The Alphen Boutique Hotel, the Constantia valley and winelands are within easy reach. Visit Groot Constantia, the original Cape governor’s mansion and now a wonderful museum and collection of restaurants.

Three of the Top 10 Restaurants in South Africa are in Constantia so book well ahead to visit La Colombe, The Green House and Chef’s Warehouse at Beau Constantia if you’re a serious foodie.

And, if you wanted a beach experience but didn’t want to travel the short distance around Table Mountain to the Atlantic, the Indian Ocean and villages like Muizenberg and Kalk Bay, named among the coolest neighbourhoods in the world by Forbes, are even nearer to your location.

With just 19 suites separated into Classic, Superior and Deluxe you are assured of personal and personable attention during your stay.

We stayed in a Superior Suite number 8 with two full bathrooms on either side of an entrance hall. One with a loo, basin and bathtub and the other with a loo, basin and shower. The sitting area of the suite, in front of the flat-screen TV and refreshment area, has a couch long enough to snooze on and comfy chairs. As a corner suite it also has an outside patio and views over the lawns and onwards to the tree-lined Alphen Trail. And don’t forget to snag a bottle of Vin d Constance when you visit.

Tell me more about The Alphen Boutique Hotel

There was a brief clearing during yesterday’s st