Having a story to tell helps your commodity become a brand 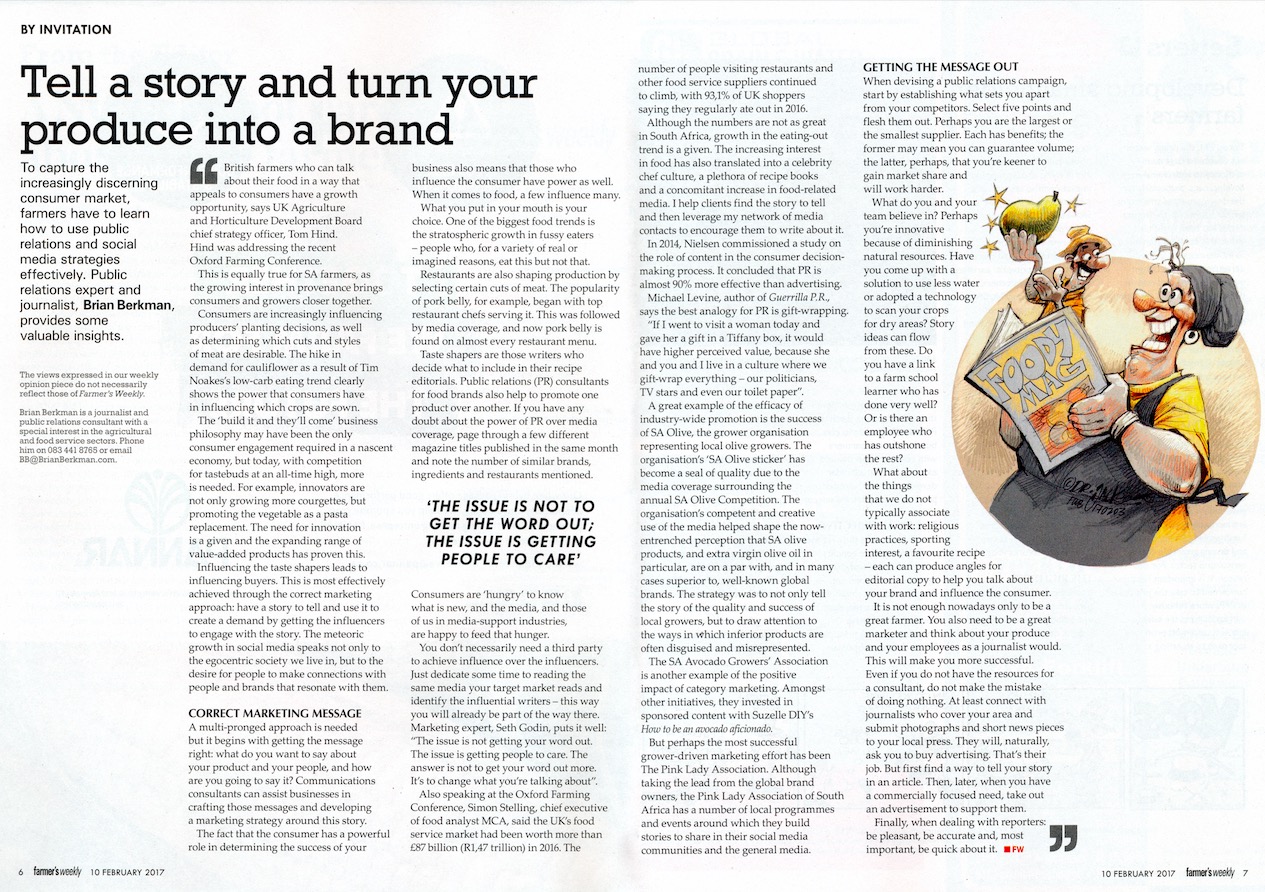 UK Agriculture and Horticulture Development Board chief strategy officer Tom Hind told the recent Oxford Farming Conference that a growth opportunity exists for British producers who can talk about their food in a way which appeals to consumers. This is equally true for South African growers as the trend towards the interest in provenance brings consumers and growers closer together.

Consumers are increasingly influencing  the choices of what growers plant and which cuts and styles of meat are desirable. Anyone watching the hike in demand for cauliflower following the Tim Noakes low-carb trend will know first hand the power the consumer has to influence what gets sown.

The “build it and they will come” business philosophy may have been all the required consumer engagement in a nascent economy but today, with competition for tastebuds at a high, more is needed and innovators are not only growing more zucchini, for example, but spiralizing it as a pasta replacement. The need for innovation is a given and the expanding range of value-added products proven.

Influencing the taste shapers leads to influencing the buyers. This is most effectively achieved through a marketing approach: have a story to tell and use it to create a demand by getting the influencers to engage with the story. The meteoric growth in social media not only speaks to the ego-centric society we live in but also to the desire for people to make connections with people and with brands that resonate with them.

A multi-pronged approach is needed but it begins with getting the message straight: what do we want to say about our product and our people and how are we going to say it?

One of things I do as a communications consultant is to help businesses craft those messages and then to develop a strategy how to use them as the bones to create a skeleton and, over time, to weave and spin stories to flesh it out. Finding the heart, in this analogy, is the key to creating a campaign of stories that all talk of the same thing and resonate with their target audience.

What you put in your mouth is your choice. One of the biggest food trends is the stratospheric growth in fussy eaters – people who, for a variety of real or imagined reasons, eat this but not that. Never before has finding something six people will enjoy at a meal been more difficult. Restaurants are also shaping production by selecting certain cuts. The popularity of pork belly, for example, began with top restaurant chefs serving it which  was followed by media covering it and now pork belly is found on almost every restaurant menu. The taste shapers are those writers who decide what to include in their recipe editorials. People like me as public relations consultants for food brands help to promote one product over the next. If you have any doubt about the power of PR over media coverage just page through a few different magazines of the same month and note the number of same brands/ingredients/restaurants that are mentioned. The consumer is hungry to know what’s new and the media, and those of us in  media-support industries, are happy to feed that hunger.

You don’t necessarily need a third party to achieve influence over the influencers. If you have the time to dedicate to reading the media that your market reads and identify who the writers of influence are, you’re some way there already. Marketing thinker Seth Godin puts it neatly: “The issue is not getting your word out. The issue is getting people to care. The answer is not to get your word out more. It’s to change what you’re talking about.”

Also speaking at the Oxford Farming Conference, Simon Stelling, chief executive of food analyst MCA, said the UK’s foodservice market was worth more than £87bn in 2016 – an increase of more than 2% in value and volume. Stelling said that the number of people visiting restaurants and other foodservice suppliers was continuing to climb, with 93.1% of UK shoppers saying they regularly ate out in 2016. Although the numbers won’t be as great in the South African context, that there is a growth in eating out is a given. The growth in interest in food has also translated into a celebrity-chef culture, plethora of recipe books and concomitant increase in food-related media. My job is to help a client find the story to tell and then to leverage my network of media contacts to encourage them to write about it which, a little like Chinese water torture, becomes a relentless pressure on the consumer to buy your product.

In 2014 Nielsen commissioned a study by inPowered on the role of content in the consumer decision-making process. It concluded that PR is almost 90% more effective than advertising.

Michael Levine, the author of the book, Guerrilla P.R., says that the best analogy for public relations is gift wrapping, “If I went to visit a woman today and gave her a gift in a Tiffany box, it would have higher perceived value than if I just gave it to her plain.  Because she and you and I live in a culture where we gift wrap everything, our politicians, TV stars and even our toilet paper.”

A great example of the efficacy of industry-wide promotion is the success of SA Olive, the grower organisation representing the common interests of the local olive growers. Their SA Olive sticker has only become known as the “Seal of Quality” that it is because of media coverage around their annual SA Olive Competition. Their competent and creative use of the media helped shape the now entrenched perception that South African olive products, and Extra Virgin Olive Oil in particular, is at least on par and in many cases far superior to well-known global brands. Their strategy was to not only tell the story of the quality and success of local growers but to also draw attention to the ways that inferior products are often masked and misrepresented.

The South African Avocado Growers Association is another example of the positive impact of category marketing and their choice to invest in sponsored content with Suzelle DIY’s How To Be An Avocado Aficionado.

Perhaps the most successful grower-driven marketing effort has been The Pink Lady Association. Although talking their lead from the global brand owners, the Pink Lady Association of South African has a number of local programmes and events around which they build stories to share in their social-media communities and in the media at large. At this stage you’re hopefully convinced of the value of marketing and in the greater efficacy of using Public Relations as your marketing tool of choice. Where to begin?

What sets you apart from your competitors? Select five points and flesh them out. Perhaps you are the largest supplier or the smallest one. Each truth has benefits to exploit. The former means you can guarantee volume and the latter, perhaps, means you’re keener to gain marketshare and will work harder to do it. What do you and your team believe in? Perhaps you’ve innovative because of shrinking natural resources. Have you come up with a solution to use less water or adopted a technology to scan your crops for dry spots and now watering more effectively? A range of story ideas can flow from these. Do you have a link to a farm school learner that has done particularly well or is there a someone who has shone more than others at work? What about the things that we don’t typically associate with work: faith and religious practice; interest in sports; a favourite recipe – each of these can produce angles for editorial. Each helps you to talk about your brand and begin the process of  influence over the consumer.

It is not enough to be a great farmer nowadays. You also need to be a great marketer and learning to think about yourself, those that work for you and what you produce in the way that a journalist would. This will make you more successful. Even if you feel you don’t have the resources to hire a consultant don’t make the mistake of doing nothing. At the very least connect with the journalists who cover your area and submit photos and short news pieces to your local press. They will, naturally, ask you to purchase advertising. That’s their job, too. First find a way to tell your story in an article and then, at a later date when you have a very commercially-focussed need, take an advert to support them. Three things will help you along your way to dealing with reporters: Be pleasant, be accurate and, most essentially, be quick about it.

Brian Berkman is a Western Cape-based journalist and public relations consultant with a special interest in the agricultural and food-service sectors. Reach him at BB@BrianBerkman.com or 083 441 8765.